All the running things!

What a whirlwind few months!! First news is becoming a Timex athlete. I am honored to be their first branch outside of triathalons and into running. 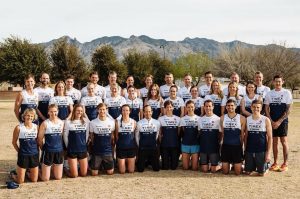 In early march I was fortunate to attend their annual training camp and meet my teammates in Tuscon, AZ. What a great experience being around like minded athletes and training alongside such people for days on end.

I then came home to host my own training camp in Northern WI. More on that in another post.

Registration for the MadCity 100K closed on March 30th, i think I officially signed up 2 days before it closed. I had been training for the race, I was just not mentally ready to succumb to 20-5K loops yet. I had a hard time wrapping my head around 10-10K loops when it was held in the arb, now 20 loops?!? Also it is a National Championship race so that means no music either.

About 3 days before the race I developed a chest cough, i was worried because the weather forecast called for lots of wind and cold temps. Great, a recipe for pneumonia. A plan was made to be positive and tackle it head on and do whatever we could to keep it at bay.

Night before a race I always have fish for dinner. We went to a place I have never been, a local place. Worth the 30 minute wait and hit the spot. I was in bed by 10:30 with all the things packed and laid out. I think i was the most laid back about going into this race than I have in the past for many reasons.
~I felt my training was sub par, I have really not been the same with my running since after Wasatch. 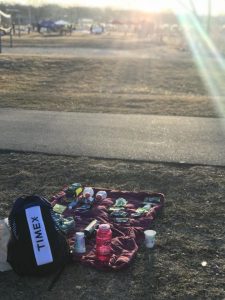 ~In feeling the lack in my training, I had little expectations for a high placing finish. I had a lofty time goal, but realistic in the approach that it might not really be possible.
~I am in a better mental state in the other aspects of my life. I am happy. I am supported and encouraged.
~I don’t feel as much external pressure surrounding a race in general.

I slept well and got up ready to race at 5am. I realized i had no yogurt for my normal breakfast, but then remembered my Picky Bars oatmeal. Done. Prepared that to go. Weather was 14 degrees, but with a real feel of 6 with the windchill. Awesome. There is no cover on the course, so mentally prepped for a windy day.

Got there with plenty of time to set up my aid station and gather my chip. Chatted pre-race with John and wished him luck. Here we go, race time.

I knew there were some big names out of the 25 people who were registered for the race. Not only is it a national Championship race, it is a world team qualifier also. It was expected to be fast and flat. 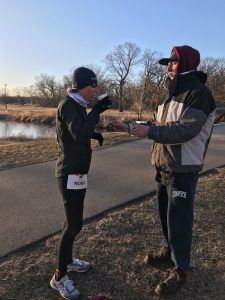 And we are off, I am in the lead pack of women and sitting comfortably. Going into the race I had a plan to go out around 8/8:20 min mile. To stop each lap for water and eat every other lap, alternating with salt and AltRed. I was lucky enough to have Nick there to be my crew at least for the first 2 hours. You never would have known that he was new to this. What a natural. Thank you so much for your support before, during, and after the race!

Those first two loops were too fast, but didn’t feel like it. I also knew that I was only 6 miles into a 62 miles race, so everything feels good at the beginning. After I stopped to fuel the first time, I knew I should slow down and pulled back from the group. It was really hard to stay warm also. You ran into the wind directly or had a cross wind for majority of the course. You had it at your back just long enough to thaw out.

I remember thinking during loop 3 that I had 17 more loops, that seemed so daunting and impossible. Even though I have run this race in the past, it has been a few years and I have been doing mountain 100 milers. Quite the difference and much more walking in those.

Nick had to leave after the fifth loop, leaving me with no crew. Which was good practice. The next race will be a solo effort with no crew or pacer. Going into the race i was worried about forgetting what loop I was on, and thought about marking the laps completed on my arm. Well the only skin exposed was my face, and that wouldn’t help me much. To my pleasant surprise they announced the lap you finished as you crossed the start/finish. Whew!

It was about loop 8 where I was feeling some cramping and knew I needed to start with the salt. My cough was starting to bother me. I didn’t really cough much because it hurt my chest really bad and I was worried about the rattle I was feeling, so I didn’t breathe deep. I remember having an internal conversation with myself that if I needed to make the smart decision to drop due to health it was ok. I also made a deal with myself that i needed to make it through 10 loops, halfway before I made any decisions. I decided to up the salt and take some tylenol and wait. Right about here my training buddy Cody made an appearance on the course. Thanks for the encouragement friend! I got to 10 loops, then told myself to get through 12.

In my 14th loop I finally saw Hannah heading into the finish of her first 50K, I got a little kick and started to feel a bit better. Coming into my little aid station set up, i see Hannah, her parents, and Nicks mom. I am elated to see people I know and to see her finish a huge goal. She had a killer race, second woman overall and first WI woman! We embraced and cried happy tears, I could have shared that moment for the rest of the day, but I had 22 more miles to run. I tried eating some of the food I planned on eating, but it was frozen and I immediately spit it out. Seeing everyone gave me a second wind, I ended up running a stellar loop with fellow runner Denise who was being crewed by a friend of mine from Cottage Grove.

So now I am at the point where I am 15 loops in, 5 loops left is nothing. Hannah said she was coming back to see me finish, so i had that to look forward to. I think she showed up with about 3 loops to go, I was back to struggling a little, I peed for the first time on the loop previous and my pee was not supposed to be that color, so I was freaking out a bit. I happen to see John at that point. He had dropped earlier and had come back to see me finish. I decided to drink more water and walk if I needed to, unfortunately walkign hurt my right leg. I have had a nagging IT band thing for the past 6 months, and i was feeling it from the top of my hip all the way down when i walked. In talking with Hannah on the course I knew that I just needed to finish, I would hit a PR, I would be in the top 5, and I wasn’t really in that bad of shape.

Coming into my aid station on my last eating loop, lucky number 18. I hear and see my friend Kelly running towards where Hannah is stationed. Holy cow was I excited to see her! Two loops left, two loops left!

I am rounding the corner to enter the park to start my last loop and I see a woman a fair distance ahead of me walking. I was ahead of her the whole race, but I thought she had dropped because I hadn’t seen her on the course for awhile. I made it my first mission to catch her because I didn’t know what loop she was on, and I wasn’t going to risk a place when it was that close. Second mission: when i crossed the start/finish I noticed the clock said 9:38, my original goal was a 9 hour finish, obviously that wasn’t happening but I’d be damned if I was going to finish over 10 hours. At this point it was taking about 30ish minutes per loop, I covered that last loop 6 minutes faster finishing in 9:55:09. Shocked to have placed 4th.

So even though I didn’t hit my overall time goal(which I knew was aggressive), I ran faster. I ran more confident, I ran more consistent. I had less stress about racing. I had people show up, show up in the ways that mattered the most. I regained some of the mental toughness I thought I had lost.

Thank you to Team Timex for having my back literally and great to represent by bringing in some hardware, AltRed( who was the cause of my abnormal pee color, it’s beets folks. I should have know), Dermatone for keeping my face protected from the sun, cold, and wind. Yumbutter for providing after race fuel.

Special thanks to Kelly for showing up and making delicious donuts and graciously sharing them with me. Hannah Banana my boo, you are the best. Thank you for being there when I needed you, and maybe even when I said I didn’t. To Nick, who jumped in with both feet and excitedly provided unwavering support throughout all of it. I appreciate it and you.
Being a coach is just as much for me as it is for my clients, this showed when John who had a rough day for his own race, came back to watch me finish and listened when I doubted myself. Thank you. 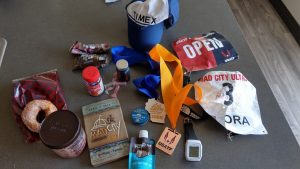