#Birdstrike vs The Speed Project

As much as I try I will never be able to put into words the feeling and experience of the weekend. I agreed to this journey without hesitation and without much knowledge. Lesko asked if I would be in for “an awesome adventure with Oiselle,” or something along those lines. How do you say no to that?! 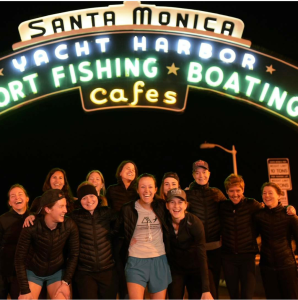 I was the only runner and pretty sure crew that hadn’t met anyone beforehand. I was going in blind to what the dynamic was going to be. Throw runners, crew and camera crew into a combination of an RV and two suburbans. What could go wrong?

From the start this race was like no other. First the secretiveness surrounding the whole thing, Second, the mandatory “meeting”, was like no other I have ever been too. Third, lack of rules and course info. Oh, and 341 miles through the desert. 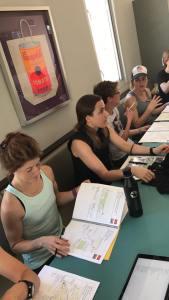 We got to our plan the night before with tired eyes and anxious stomachs. Our plan was a 123,123, 456 format. With runners 1-3 running 6 mile segments and 4-6 running 12. This was to maximize rest. The 3 sets of 2 crew would rotate through vehicles so that one set was always resting.

Morning came at 3am. We had to pack an entire house into an RV and a suburban and leave the house by 4am. Since I was the first runner, I chose the departure time so that we could be at the start by 4:15 for the 5am kickoff.

The energy from our team and the others around was honestly contagious. We were amped. The countdown began and we were off. I settled in nicely at a good pace, conscience of any woman who was near me that they could possibly be on one of the other 6 person all women teams.

OK, if I continue to go step by step this blog will be so long. So summary it is…

After our first round of 2 runs the first group went to eat at a little diner, I ate the biggest burger ever. This, however in hindsight might have been a mistake, the next two runs I had to run with the burger undigested in my stomach. 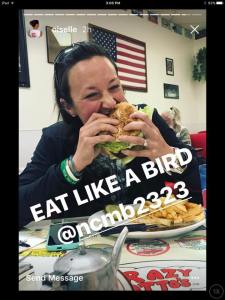 The order in which things happen become a little hazy due to lack of sleep and lots of things happening. The first day was pretty smooth and we settled into our routine for the next few days. There wasn’t much sleeping but there was lots of eating. We started to come together as a team and really lean on each other. That day ended with an amazing sunset that pictures cannot do it justice.
When we lost Devon initially, it was night and it was decided that Collier and myself would absorb her last 6 miles of the leg she was on. I would run 3, she would run 3, then I would run my 6(actually 7.5) to get us back on track, then back to Collier. After this set with Cathleen I believe was when we found out for sure that Devon was out.
This is also where we hit the halfway mark. To celebrate this momentous occasion we had a dance party. Blared Salt n’ Pepa-Push it and got out of the car as Cathleen passed us and danced! Some of us even got ontop of the SUV. This is also where one of the theme songs for the race made its first appearance. Ed Sheeran anyone?
It was about 4 or 5 am and we were exhausted.
The plan now needed to change but how? We decided on 12345 format of 6 miles each. I finally got 2-3 hours of deep sleep. When I awoke I thought we were in Vegas and they were so nice to let me sleep.
Many things I remember about this trip are probably not in order, but are important. With losing a runner we gained a bigger team. The camera crew d 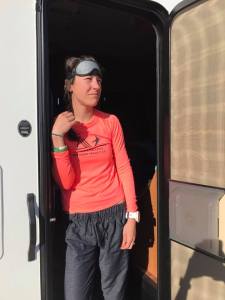 oubled as crew in many cases. They sacrificed their own sleep to make sure we were safe. They drove the SUV through the sketchy desert, they rode bikes next to us throughout the whole night, they followed us with extra light. Even drove to get us Subway, which was the best sub I have ever had!
Death Valley was hard and it seemed to never end. Our strategy of 6 mile segments went out the window fast. This road wasn’t very busy and it was very straight so it was decided that the RV would go 1 mile at a time and wait for the runner to arrive. This helped mentally for the runner knowing it was just a mile, also it helped the crew be able to help with water, ice, and fuel. For most of that long stretch (100 some miles) we went 2 miles at a time. This seemed daunting, I tried to think about it in a different way and brought this up to give us some perspective. If each of us 5 do 3 miles at a time we are covering 15 miles in a set. 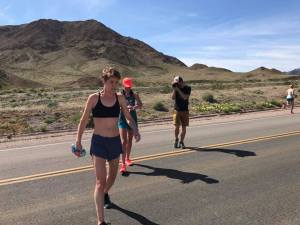 There were many times where one runner would do 2 miles the next would do 2 then the previous runner would go back out and do 2-3. Every mile put in here by a fellow teammate was precious and meant more rest for the next. Each of us was ready to go, most outfits stayed unchanged, shoes and socks stayed on. But every extra mile run by a teammate was welcomed with open arms.
During a glorious downhill I ran 4 miles and could have went further, but all I could think of was that the next runner should have a piece of this, experience this high after we have all been so low. This is the thoughtfulness and attention each one of the runners held for each other throughout.
My appreciation of our crew was high from the get go, but here is where it reached a new level. From running alongside us, to biking beside us, to the ice rags they gave us. They worked harder on probably less sleep than us. Their commitment was unwavering and I hold a deep spot in my heart for each of them. To the crew from afar, the support that kept coming our way throughout was not looked at lightly, we held onto those comments and took them with us in those dark and awful moments.
Running some solo night miles after that was truly special. I took the time to stare at the stars and the full moon to take in where we were and what we were doing. A little mental reset.
Seeing those lights of Vegas with about 30 miles to go, was surreal. We were so close, 30 miles was nothing, we had just done over 300 miles! These 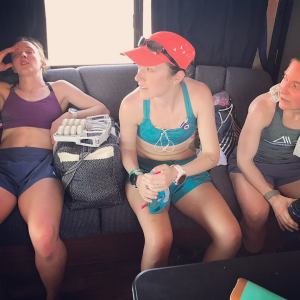 miles were the best, that bond that had been forming between crew and runners was being solidified. The phrases: we are almost there, we are so close, you can do this, were on repeat. Seeing that sign, joining together(crew and runners) for that last mile to cross that line together. We became one. We did it. Us. Together.
I remember feeling disappointment right then, there was no finish-line crowd to cheer for us, no announcement of our arrival. I also remember being mad at myself for focusing on that. Looking back and hearing Collier say it best, “we didn’t need the fanfare we were the fanfare,” is true. We didn’t need some outsider telling us we did it, we felt it in our hearts.
This adventure was a once in a lifetime gift. I will never forget the feeling these women and bro birds made me feel. I left that trip feeling empowered, strong, capable, accomplished, and part of something so much bigger than that team. We came with a job to do, not only did we do that job, we did it well. We did this for #birdstrike, we did this for Oiselle, we did this for women in general. We did this for you.
Some amazing things can happen when you say Yes to vague questions of adventure and dance to an Ed Sheeran/No scrubs re-mix. 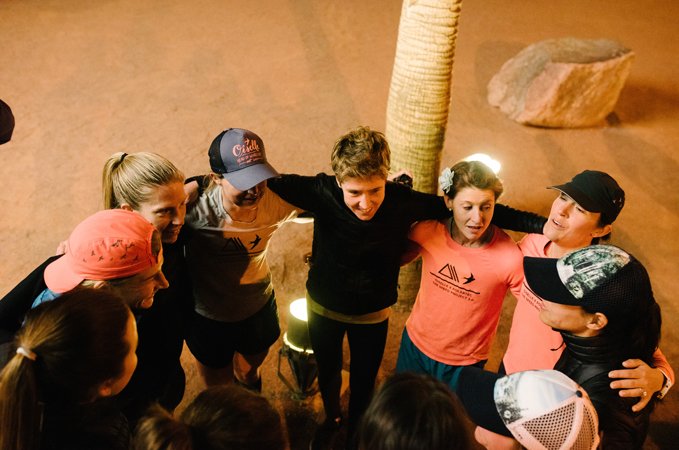