This race has been on my yearly schedule for the past 5 years. It has been my fall goal race. This year it was in the back of my mind all year, but still not sure if it was going to actually happen. Leadville was IT this year. All my focus after the 100K National Championships in April, was Leadville. I didn’t look at my race calendar after Leadville. I had no idea the shape I would be in physically and mentally, so I just kept myself off of the calendar.
I have a client who made this race her goal race. It would be her first 50 miler even though she runs 50K’s all the time. I would be at this race regardless, I would never miss a chance to be there for a client on such a big day. 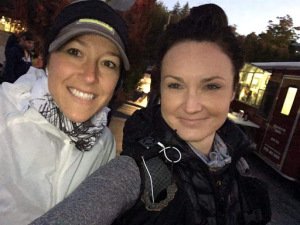 Back up just a bit. I attended a running retreat in Arizona put on by Kara Goucher. Yes, THE Kara. Some of my dear friends who I met at a camp similar to this with Kara as well last year, were also there. So not only did we get to hang with Kara, we got to spend some time together. This camp was intense. It was hard. The running wasn’t hard, it was the rest of it. I do not think I have ever been so venerable, stripped down to a raw emotional state in my life. Sharing fears and dreams is scary. It can also be tremendously liberating. You are in a safe space with all these women who are in the same state as you. I came home exhausted, emotionally.
On the last day we all shared our intention for the next year. I set mine high. Now that I have finished Leadville and it wasn’t the destroyer that I thought it would be, I thought about what’s next. I am going to enter the lottery for Western States (Leadville was a qualifying race), I will enter Leadville’s lottery as well. There is also the Vermont 100, and Wasatch 100. If I get into all of them and complete them it is considered the Grand Slam and will be 4-100 milers in about 4 months. Bonus: Kara herself said she would crew for me if I got into Western States, um YES!! 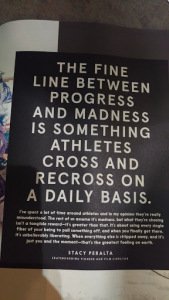 Anyway, on this retreat I had also made up my mind that I would run the fall 50 as my last race of the season. I had hurt my ankle on this trip and had to bow out of a 20 mile run at mile 13. So maybe I shouldn’t run it? My reasoning being it was the last race, so if I get more injured I’ll have the time to take off. Dumb, I know.

It’s race week and I take a few days off, run with clients and friends, but for the most part my ankle feels fine. It was decided that I would for sure run, but I would be alone. Most of you know that Roger is a primo crew chief, so to do the race alone was new for me. I got up there the night before about 6:30pm, registered(pretty sure I was the last one #119) and ate dinner at the hotel. I then drove the 15 minutes to the cabin I was staying at to get my gear bags and attire situated. I had a good talk with my client about race plan and prep and we agreed to meet at the finish line to get on the bus together in the morning.

3:30a.m. came early, but I was wide awake. I had attempted to make overnight oats, not knowing what would be available at the cabin, this was a fail. I ate maybe a half of a cup. Packed my things into my car and headed to the finish line. I meet Ali on the bus and I can see my car, my lights are still on. I go back to the car to shut them off and I had left my car running, awesome! Is this how the day is gonna go?

On the bus I eat a picky bar knowing that I needed more to fuel me at the start. When we get to the start there is the obligatory bathroom break and we now have 20 min to the start. Since I have done this race many time before I look around for familiar faces. I see none, this can be good or bad. The gun goes off and I am out front with the first pack of about 10. My race philosophy is to get out front fast and stay there. I pass one woman right after the first mile, I’m pulling a 7:40 and it feels good. Shortly before the first aid station a different woman passes me. The first real “hill” is just up ahead and I can see her slowing. This is my chance. Normally I would walk the uphill to save some for later in the race, but I felt strong. I latch onto the two guys ahead of me and pass her holding that same pace. I pass the guys at the top, “thanks guys, that was fun!” I never saw that woman again.

Since my crew wasn’t there I had to rely on the aid stations for water. I had brought my own food and had it on me, and dropped a few bags along the way to restock the rations. So I blow into the first aid station for some water and back out. The weather was a dream! Mostly cloudy, little to no wind and about 50 degrees, Perfect! I started the race with a light wind proof jacket that came off after the sun came out and ditched at aid station 5, I think. This jacket is genius. No tying around the waist, you stuff it into its own pocket and it has an elastic band so you can slip it onto your hand. Even better, straight from the head bird herself Sally, is to slide it up your arm so it rests above the elbow. Boom, tried and true. Thanks Sally!

At the second aid station I had placed my handheld bottle with water and some extra food. But with the cloudy day I made the decision I would go without. The longest stretch between aid was about 8 miles. I was taking salt tabs every hour so I figured I would be fine as long as I drank 1-2 cups at each station.

It gets a little blurry until about mile 18. Up until that point there was a group of about 5 of us, two sets of guys and myself that piggy backed each other but all holding that same pace. I remember thinking that I could hold this, it was uncomfortable, but I could do it. We all pull into the 18 mile aid station roughly at the same time, we joke and chat a bit about how the pace is good and the weather is awesome. They ask to confirm that I am the first female, why yes, yes I am. I eat a banana and drink water and am the first out. Shortly, one of the pack came up behind and his buddy had dropped back. The pace was too fast to hold onto for him. We continued together, but with him just about 10 yards ahead holding pace. He didn’t have a watch and this was his first 50 miler, so I was his pacing strategy. 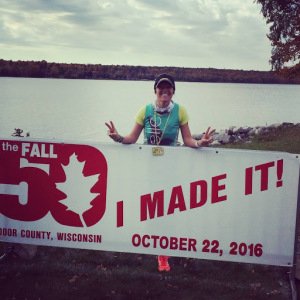 Much of the same happened until mile 32. I was in the lead up until then. I was in the aid tent getting water and this young girl comes flying in and out. The volunteers look at me, and with a smile on my face I say “let her go.” I knew I had to pull back a little, my ankle was acting up, not much, but it was there. I knew I could waste energy and hold that pace for a short time in an effort to catch her and then have it backfire and blow up so close to the end. I decided to pull back 30 sec per mile and hold it.

Coming out of the second to last aid station I see a woman behind me, no way am I going to give up second place. I will fight for this. The guy who I had been piggy backing with left that aid station with me and I told him I had to hold under a 9 min mile to keep the distance from the woman, he fell off. See, you start to panic when you see someone behind you, you think that they will just fly right by you like you aren’t moving. In reality you are going about the same pace just far apart. I was taking no chances. I knew I had to make the last aid station as fast as possible, I got water and grabbed a liquid sweet potato clif pouch. It didn’t taste so awesome. But it had 200 calories and I could just carry it and squeeze for the last 4 miles. When I looked back with a little more than a mile to go and there was no sight of the woman, I relaxed a little. My pace didn’t slow, but I didn’t go any faster either. At the finish I did, of course. 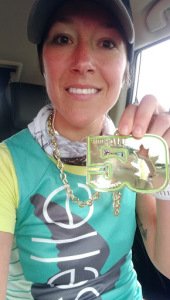 Coming across the line was surreal. It was the first time in my racing career that I have not had someone there for me. And for how I just raced, and how that felt, man it was weird. Next thing I know, I hear my name. Its Shawn a guy who happens to be at every race around and I met through my friend Angela(my Leadville pacer). I finished in 7:37, beating my course pr by 23 min, my 50 mile pr by 18 min, and hitting other pr’s along the way.

I went to my car to get my phone to call Roger. I started crying, he was shocked and proud and disappointed that the one time he doesn’t come that that’s when I decide to race! I changed in my car and got some food and root beer, anxiously waiting for Ali to finish. 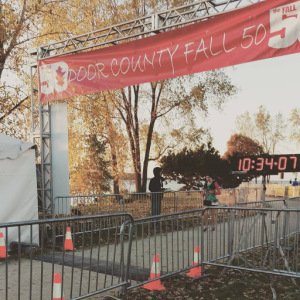 I never doubted her ability to finish this race. I knew she could do it and within the cutoff. Around the 10 hour mark I text her. I knew she had her phone and I was almost positive she hadn’t finished, but in case she had I needed to find her. Her response was that she had been vomiting and not doing so hot, she was in between 48-49. I wait patiently at the finish knowing shes got this, she is not a quitter. I see her and she is full of emotion. She did it! Any feeling of self satisfaction that I had about my race was wiped away when I saw her. 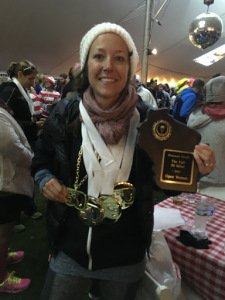 This is what I was proud of, being in her shoes as that race was my first 50 miler as well. I know that feeling, I was so unbelievably proud of her, and writing this almost a week later brings tears to my eyes. This is why I coach, to see this, to feel this.

The woman who won beat me by 7 minutes, the woman behind me was 4 min back. I came away with a check for second overall woman and a medal. I got a medal for being first place Wisconsin woman and an awesome plaque. I was also first in my age group 30-39, so thank you to the young girl from Minnesota who beat me!

One thought that stood out in my mind near the end of the race was that I am so ready for a break. Just a baby break, like a month or so. So 2016 racing, that’s a wrap!