Let me tell you something. Yesterday was a day I will never forget. I have spent many days training and thinking about it.
I have spent 114 hours, logged 736.41 miles, and burned 67,000 calories yet nothing could have prepared me for what happened. My body and mind were pushed to unthinkable levels but I still made it. never running that distance before and having my longest training run be 31 miles doesn’t even compare to 50 miles.

Since about Thursday started the pre-race bitchiness. it is not intentional but happens nonetheless. i get very anxious and nothing seems to go right, i have to have a plan for everything, etc… It had been raining and the forecast for Saturday said 40 degrees and rain: fanfrickentastic, just how i wanted to spend 8 hours!
Friday comes and it is still raining, roger and i made it to door county thursday night and stayed in a nice bed and breakfast. We relax and go pick up my race packet, eat some fish(it is friday in wisconsin afterall), and start to pack and plan. Rogers plan to be my pit crew on his bicycle, that meant we needed to be strategic in clothing/food choices for both of us.
I made my morning smoothie friday night, and at 4 a.m. the alarm went off. The anxiousness was gone, race day is finally here. Coffee and a smoothie, done. bathroom time…not yet. roger eats, we  pack the last minute things, try to go to the bathroom again….nope. So off we go, out the door at 4:50. it is an hour drive to Gills Rock and I don’t wanna be late. we get there about 6:10 and it is still real dark and they are still setting up the start area. pretty sure we were the first ones there. I am ready, pit stop to the luxurious bathroom for one last try….nothing!
So here I am letting Rog lube up my legs with his magic stuff to help block out the cold. get your mind out of the gutter…not that magic stuff.
we start late because the shuttle with most of the solo runners coming from Sturgeon bay was late!!
Lined up and surveying the competition the gun goes off at 7:10 a.m. Only goal: finish under 8.5 hours! 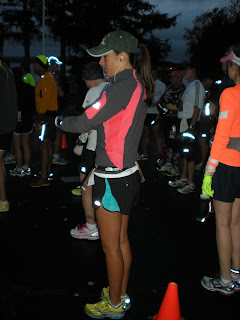 And we are off, my goal for the first half was a 9 minute pace, then I would kick it up little by little each mile after that. well I have a tendency to go out too fast at the start, so crossing the start line I took it easy. I stayed with a few people and felt good, slow, but good. Over a mile away you could here the crowd and the music blaring. It really was awesome.
By this time I knew Roger was already on his way back to Sturgeon bay with the car and then he got on his bike and the plan was to meet me no later than the 24 mile rest stop. So for almost the whole first half I was on my own. Bring It!

Roger caught up with me shortly after my running buddy stopped to say hi to his family, i was glad to see him! he informs me that i am the 3rd female, what, how did that happen? There are two women behind me though, I recognize both of them from the group at the beginning, damn!
my running buddy passed and he was now in orange. I didn’t try to catch him, kept him in sight though.

Miles 26 to 30 i would say was the start of the decline. 9:26, 9:13, 9:03(rest stop 28.4), 9:10, and 9:12. I was out of gels by now and about 4 hours in. My stomach was starting to get angry because i had no real food and i was getting frustrated.  I started to eat some mixed nuts, a granola bar, and a couple fruit chews. that helped. I had some IT band issues earlier, I have never had this before but by hearing about what it entails I knew immediately that’s what is was. this cannot be happening today of all days, seriously?! thankfully it dissipated leaving me with a very tight right hip! The guy i had been running with was still in sight and had a couple people riding bikes with him, one stopped to take this lovely picture of us. Before the next rest stop I passed him, at what point you ask…I have no idea! 20 miles left, which means i could finish under 8 hours, that’s crazy! i was thinking at this point even if i run 10 min/mile it will take me 3 hours and 20 min. which would get me there just under 8, but i still have to run for 3. more. hours. WHY!!!

Miles 31 to 35, I got passed at the 32.2 rest stop by a woman who was close to me most of the way. i went to try to go to the bathroom….zilch, i really should have just stopped trying at this point. 9:25, 9:41(rest stop), 10:05(hill), 9:45, and 9:39. Coming out of the rest stop it went into a very steep hill, I walked that one. Now I was 4th woman. all i can think is i will still place because at least one of them was in the masters and the woman who just passed is also. Once you have a taste of that glory it is all you can think about. Roger informs me that there is another woman not too far back, the other one from before! Don’t fall apart.

Miles 36 to 40, ok now i’m losing it. by this point i am running at least a minute slower per mile that the first 20. 9:59(rest stop and the other woman passes me, fml), 10:33, 9:52, 9:49, and 9:50. All that is going through my head is mile by mile. One mile at a time, literally roger would meet me at every mile marker and see what i needed. i needed something to look forward to, otherwise i don’t know what would have happened.

Miles 41 to well the end. First off my Garmin died at 40.2. it was fully charged, now what? The next rest stop was at 42.2, I had orange slices and shoved apple slices in every pocket i had to take with me. I noticed that the older woman who passed me first was having a hard time before the rest station and looked as though she might not go back out. I flung my watch at Roger, why wear it if its dead? the slow process of starting running again commences. That woman never made it out of the rest station.

I really don’t remember much till about mile 47. I do remember thinking that i would let everyone down back home who was cheering me on from afar. how ashamed i would be if i just quit, im not a quitter! So i pushed a little deeper, from an unknown place of pure will. I latched onto a guy who was leap frogging with me pretty much the whole race. he was now my rabbit, i knew i could go a bit faster and he was watching his pace. at this point i knew i couldn’t let go, so i told roger to meet me at the finish.
even this guys tween daughter starting running with him at 48. even at this point the miles seemed to go by fast, even though it was hard, they seemed to fly by, one by one they were counting down for me. until this: 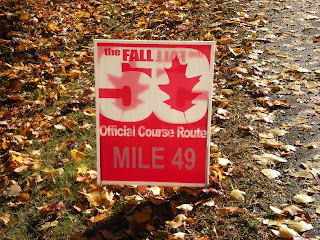 Why did i think this was a good idea?
who do i think i am to be running 50 fricken miles?

Also what did my rabbit do? he sped up, yep that’s right he was going faster! i pushed i really did, i watched as he pulled away. i saw the crew in their yellow vests waving their orange flags. it was like a dream where you are running and going nowhere. they seemed to be getting further away, i tried to run faster but i couldn’t feel my legs. i turn into the parking lot finally and the guys daughter runs with me to the end pushing me, yelling at me, telling me i’m almost there. and there i am somehow crossing that finish line with a time of 8:00:12. how did i just do this? and i placed, what? i have nothing left, i literally gave it my all. i left everything i had on the course and no regrets. 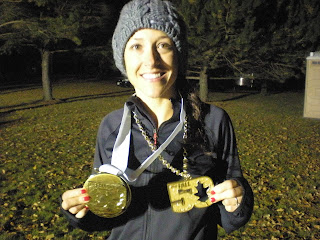 I thought i would cry as i crossed the finish line, i was so exhausted that i couldn’t even do that. We hung around because i did indeed win second place in the open division which was 39 and under, i had to get my sweet medal after all that!!  As the sun set it got pretty chilly, i was standing in the sun and felt this huge pain in the hip that was bothering me. I got stung by a bee! really?!

I did cry though…. later that night back at the hotel after the awards ceremony, after all the great jobs, well dones, and congratulations were exchanged. upon reading all the well wishes from everyone back home i got one that tugged a heart string and the waterworks started to go. i lost it.  i did not however know the extent at which this went to until i got home today. this is what waited for me: 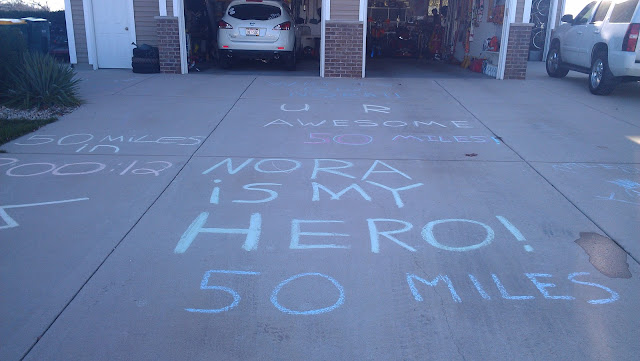 As i sit here and write this I tear up still. i am lucky to have people in my life who believe in me, in what i can do even when i doubt myself. I am lucky to have an amazing partner who got my through this one mile at a time, letting me yell at him and not letting me quit. For the next couple of days i will be in active recovery, resting mostly. in a months time i will be at it again, i do have Boston 2013 to train for after all!