Yesterday was a rest day, mostly out of convenience. We drove from Marquette MI, to Minneapolis MN, about an 8.5 hour drive=awesome. We would not however let the drive hinder us from our exercise. We did a little research and came up with a place that we could both start at and her could ski and i could run from. Running around the lakes seemed to be the best bet. The weather was a bit chilly, 23 degrees but windy. I forgot the dermatone for my face, so I was a bit wind burnt when I got finished.
The run overall was great, I was practically jumping up and down so excited to run after being cooped up in the car all day! I found a great path (the Grand Round Scenic Pathway) and it was a mostly paved shared bike/pedestrian path. Most of the path was still snow covered, even though like here snow was scarce elsewhere. Being as the path gets used alot by commuters and other fellow runners, the snow was packed and for the most part easy to follow. I did bring a map to make sure I was on the right track though.
I forgot to pack my fuel belt, and was not going to carry water in my hand, so I had no water for the duration, but i did bring a gel to take halfway through. That was the first time I have taken a gel in the cold weather, it did vary in consistency but not frozen! I got more than halfway through the route and was about to go around another lake, but by looking at the distance I had already ran and the distance it was to get back, I would have been over mileage by about 3 miles and I wasn’t prepared for that. At that point I turned around and had the wind to my back(finally).
my legs got a little tired around mile 10, but didn’t stay that way for long and it was a good run the rest of the way back, i could have went further given the time. 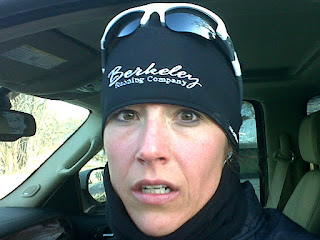 I wore pretty much the same thing as Friday, except black bula neck gator, shades, and REI socks, and Berkeley hat, it is a bit warmer than the quilted one.