This was supposed to be a training run and in most ways it was.

The night before was like most nights before a long run or sometimes a race. I had to download new music, check the course, get my clothes laid out, check the weather, charge my watch, and make sure i had all the food i would want. I was up late and we had to be up by 4:30. When the alarm goes off and as my husband and i lay there and being so tired i say:
we could just go back to bed and i could run later today, no big deal, its just a training run.
are you serious, with this hopefully tone.
Only 10%.
We got up. 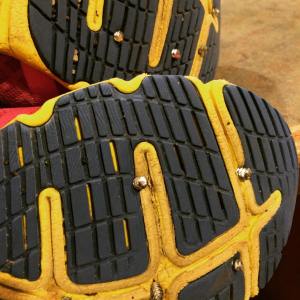 i hadn’t yet registered for the race so we needed to get there a bit early. i had no idea what the course would be like, I knew that it would be a loop or an out and back and the loops could be up to 8 miles. we would also be on a snow mobile trail, so we are on the snow. I am glad that the night before I had asked Roger to put screws in my shoes for extra traction.

This is the first race that I have done since the Fall 50 in October. My first race of 2016 and really only 5 weeks into training. I had no expectations, this was just a long training run with a bunch of other people.
At the start of this race i was not anxious, i wasn’t in my head, and i was excited! That has never happened. I knew something had changed last year before my big race and I kept saying something changed, but now I know it has. I have seen it and felt it. This felt different.
Casual start and we are off, down the road and into a single track section, thankfully i was at the front so i didn’t get caught in the back log. i felt great, the right leg tightness and pain that i thought would bother me didn’t even exist. The first section was an out and back. going out was much better than coming back, you didn’t realize how much downhill there was until you had to turn around to climb it. I was feeling strong and climbed them all. You pass the single track and head into the “loop” section. This was my favorite part of the course, ok, maybe second. the hills were not bad and you could fly down the downhills and gain so much speed. From here you went back into the single track, this was my favorite part actually. I felt so strong climbing and on the decent, I passed quite a few people within this part.

Since the course is out and back you have the opportunity to pass people and see them frequently along the course. You get a good sense of who is in the lead and where you are in relation. The first loop was confusing because people were allowed to start early if they thought they would not be able to finish within 7.5 hours.
Coming into the aid station at the end of the first loop, Roger had everything i would need. I grabbed a GU and ate about half. It was gross and I haven’t had one since October. I have been purposely not fueling on my longer runs trying to stretch my need out. I am trying to fuel more naturally, so that was a shock to my system.
Second loop, lets do this. Feeling good and I see a woman who is running with a group of guys not too far behind me. Telling myself its not a race, you are just doing a training run. That is hard to listen to sometimes, especially if you are competitive(me, me, me).

This loop was much like the first, feeling great and everyone on the course was so encouraging and nice. I had a smile on my face quite a bit. Coming into the aid station at the end of this loop Roger tells me I am in first place(I knew this, but not trying to admit it as not to jynx it) and she was about 2 min behind me. i grab a Picky Bar and go. Roger meets me as I leave the single track with some water and tells me to stay strong. This lap was a bit harder on the way out, i was starting to feel the hills. I see him as i head into the second half of the loop and tell him i’m falling apart. I wasn’t, i was exaggerating. Pace.
Aid station, last loop to go. I grab another Picky Bar and eat half. I see the woman who was behind me go into the bathroom at the end of loop 3, ok I just gained a little more time. I walked the hills on the way out of the first portion so I could save energy to kick it in on the last section. i didn’t NEED to walk and that felt awesome. I see the woman further behind and I am feeling so strong, i go in for the last out and back of the single track and people are congratulating me on the course knowing i was first place. i wasn’t going to revel in it until i came across the line. anything can happen.

But I did it. I won. i was the first place female to finish. 8th overall i think and shaved 8 min off my best time. New PR. I felt awesome the whole race. the WHOLE TIME. That has never happened.

These people, this group, the atmosphere, was unlike anything i have ever experienced. I told the race director probably 5 times how much i loved the course, how great it was, how much the whole thing was amazing. Maybe it was because I had changed. I am more aware of my surroundings and the people who make it. Maybe it is because I am more present. I guarantee I would have felt the same way even if I hadn’t won. I truly came out there for a gut check, a nice long training run. it was double the length of my longest run in this cycle so far, I was just hoping to finish.

I went to an event later that night all dressed up. All women. It was amazing. Everyone is on their own path and they are all different. I felt myself trying to hide my accomplishment of earlier in the day. I didn’t want someone else to feel bad about their journey, even though it’s not the same as mine. Then the words hit me. Don’t apologize for who you are. Be you.

So, I won. I had come so close in past. It feels good. I know this will not be the last and if I can do it on a whim as a training run, what am I capable of if I race?