This race each year turns out to be the litmus test of my winter fitness, or I like to think that’s how it is going to be.

Last year I went into the race with zero expectations and still pulled out a decent performance with a nasty cold and limited training, so this year in all aspects should be better.

This year I had a decent amount of anxiety that coincided with the build up to the race. I was in the healthiest in a long time, if not ever relationship and to have it end before the race, but in an honest and open way, was actually very cathartic. A conversation between two adults who knew what they wanted and had enough respect for each other to say so. A relationship that I thought could have had some long term potential but had just ended very maturely and without incident, oddly enough put me into a really great position for the race. I think this was the calmest and most focused race I’ve gone into in awhile. It was the period before the race where the anxiety lay.
I didn’t look at the weather because on Monday it was 70, and then we had snow, rain, and crazy wind mid-week. I know better by living in Wisconsin that the only weather you can pay attention to is the day itself. 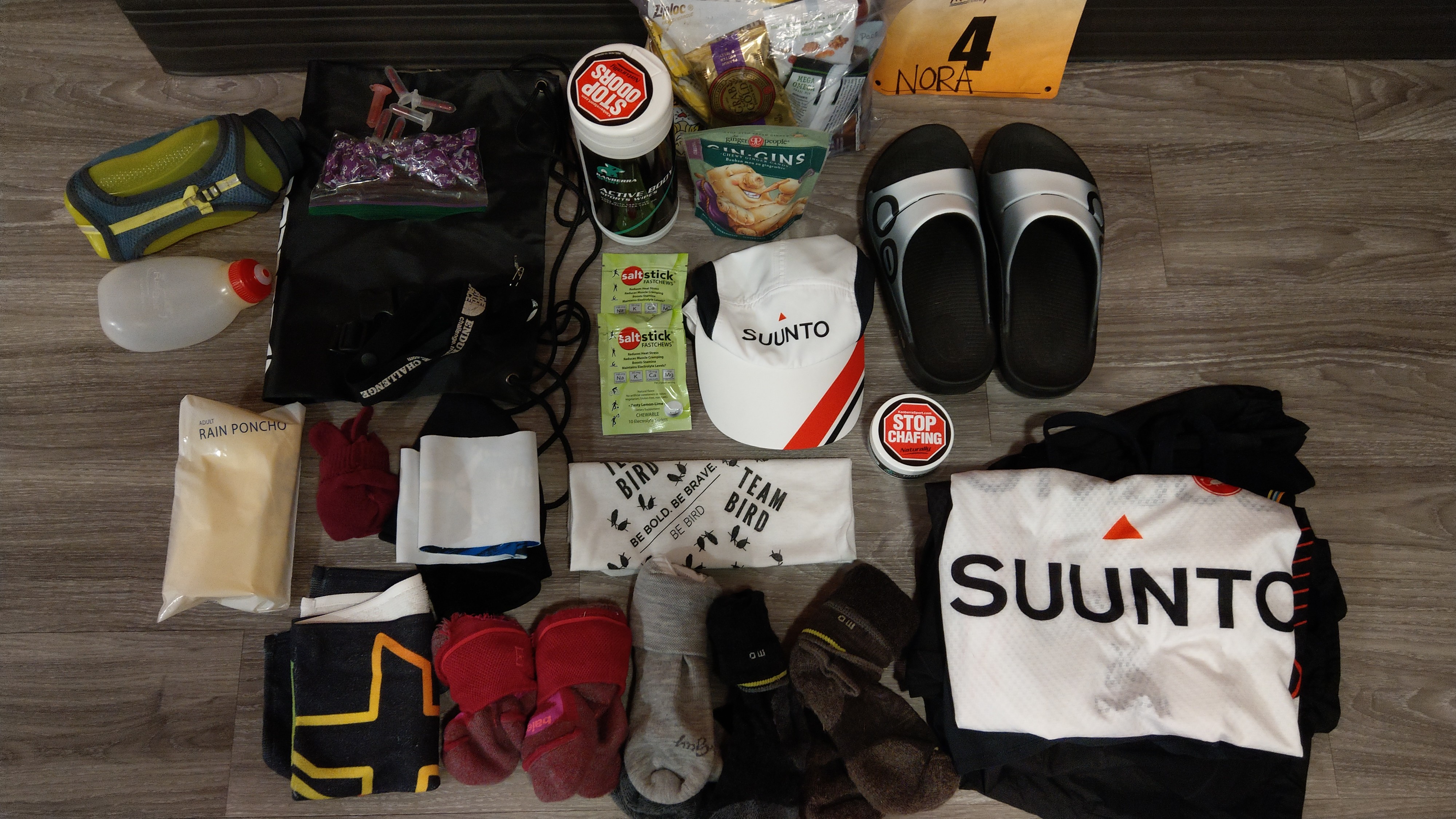 Before: Picked up my packet and got to meet some fellow 100K’ers, all from out of town. I went to dinner with my girl Hannah and her son Uriah for fish. That is almost always my night before race food. I packed my drop bags and my after the race bag. I then spent time researching the competition. Being a competitive person I wanted to see the women that I would be running against and the reality of my performance in comparison.

Race Morning: I wake up at 4:30am, let the dog out and make my coffee. I take one last look at the weather and decide what I am going to wear. As I pack up my breakfast, gear, and coffee I start to think about what goals I want to achieve. I set some light goals knowing that I wasn’t fully recovered from my Run Across WI yet, and really don’t know where I’m at. Set a new PR, and come in in at least the top 3.

I arrive at the race start about 5:30am, grab my back tag and meet some of the other 100K runners. Do all the pre-race things, get my bibs on, place my fuel at the designated area, and meet up with my friend Allison. She came to the start to see if I needed any help getting situated. 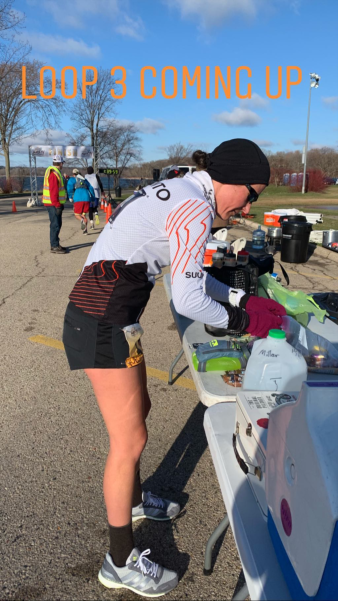 Weather wasn’t too bad, I believe 30ish at the start. I wore shorts knowing it would get warmer over the next 8 hours. A long sleeve wool base layer, my Suunto long sleeve singlet and my Patagonia Houdini jacket for a wind-block. Also hat and gloves.

Start: Its very jovial, we are all commenting on the weather and how some people are from down south and not ready for the cold snap. Timo gives us a nice countdown and we are off! For the first 10K loop Caroline and Ryan and I run together talking about where we are from, what we do, etc. I give them a little course info since they have never seen it or run it before. As we finish the first loop, I stop at my aid to grab sunglasses and eat. They take off. I knew the pace was faster than I wanted to hold right out of the gate and decided to hold back a bit and groove it out for awhile.

The next few loops sort of blur together. I take off my outer layer as its warming up now that the sun is shining. I decide not to carry water or food. I have food at both aid stations and they are about 3 miles apart, so taking in food and water there seems like the logical choice rather than to carry it.

It was such a nice boost to see friends at the start/finish area willing to help and give me encouraging words and hugs! There is a 50K relay that happens during the 100K, so it was perfect for friends to do both! My friend Hannah came with her son Uriah, and that was definitely a highlight in the middle loops. But, honestly I don’t mind running alone.

As loop 7 comes, I feel good. My legs have been heavy the whole day and that hasn’t changed. I start to walk some of the hills and I have come to the conclusion that I’ll place second. I had accepted it and kept my even pace going. 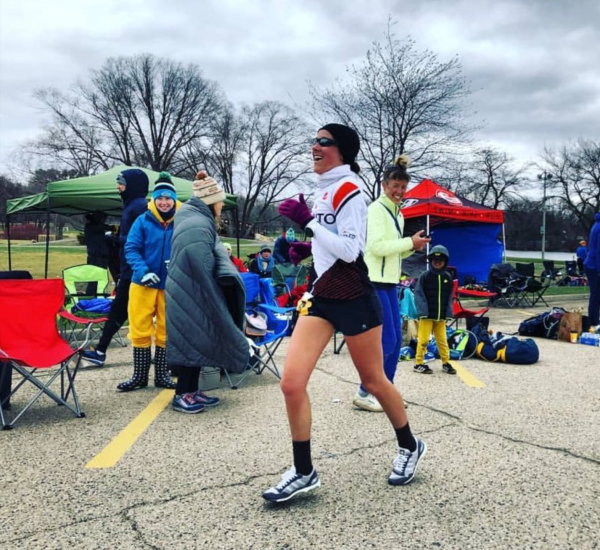 At the end of the 8th loop, I was told by the officials that “she” was right ahead of me. What does that mean? How far? Close enough to catch? What shape is she in? At this point my brother shows up and I have to use the porta potty, bad! In and out and ready to tackle the loop. I pass a 100k guy with about a mile to go, he didn’t look in the best shape and doubled over, but he said he was good so I continued on.

At the beginning of the 9th loop the same guy comes out of nowhere, I make the comment of “well you rallied well.” We stayed together until the aid station inside the arb. We both ate, but I was ready to go while he sat down and as I left I made the comment “Come catch me.”

Coming into the start/finish to begin my bell lap, I try to eat as much as I can, because I don’t want to stop again. I knew I’d be close to a PR and I wanted it. I had no idea how far back third was. Here though, I was told that “she” was only 7 minutes ahead. It’s now or never. I thought about this, 7 minutes over 6.2 miles is a lot of time to make up after already running 58 miles. On the other hand, I told myself that I needed to push this race and see what I could do, I know I’d never forgive myself if I just settled. So I went for it. I pushed to catch her. Low and behold I stop at the midway aid station for some nutter butters and water and Francis blows by me, stating “You told me to catch you.” You can guarantee that I left that aid station in a hurry to catch him, I didn’t end up catching him, but it gave me an extra fire.

About 2 miles left I round a corner and I see her, her bright pink shirt and I start to choke up. Holy, shit I could win this?! I can’t believe I am going to catch her! Then I start to think: What shape is she in? Is she bonking, and if she is, when I pass her now will she be able to keep up? Is she just cruising and dogging it waiting for me to catch her? So do I wait and hold back a little so our sprint is shorter? Do I come up now and try to get the lead and see what happens?

I decide to go for it, just as I am coming up on her at the 1 mile to go mark, my friend Kristen is on her bike and shouts some words of encouragement, she sees me overtake her take place. How awesome for her to see that when she realized what was happening. I pass her on the right and say good job, I kick it up a little more and wouldn’t you know it, she sticks to my left shoulder. Fuck. Here we go.

We stay neck and neck almost all the way, until about 300 yards til the finish and she just had more in her at the time. Mind you I pushed the last 5 miles to catch her. That last mile was the fastest of the day. 20 sec she beat me by. 20 sec and I could have been a National Champ. She broke the tape right in front of me. Am I upset I didn’t break the tape, sure. But, I’m not mad. I did what I set out to do. I placed higher, I PR’d, I ran with all I had. 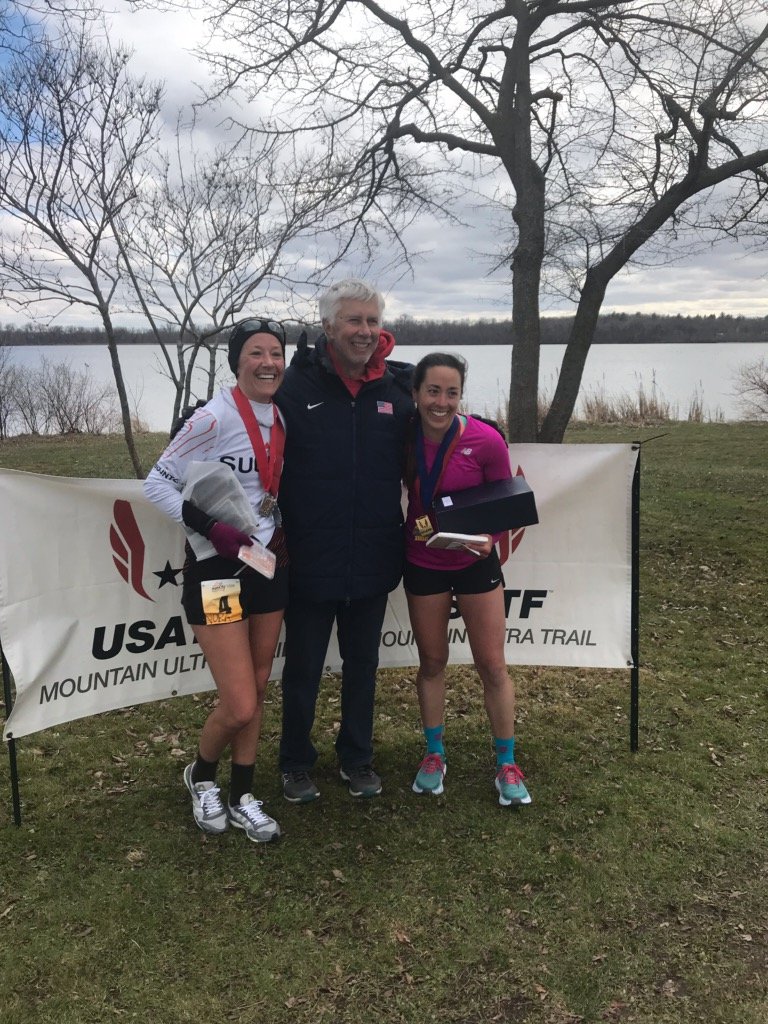 When we both finished the excitement from the officials was so awesome! I was fatigued, but not trashed in that 100 mile waddle way. They said they could see us across the lake, saw when I caught her and the battle that was happening, very rarely in a 100K road race do you see a sprint finish. It was pretty cool, even though I didn’t get the W.

I have to give special thanks to all of those who came to cheer and support me: All the Wisconsin Volee, Kelly, Allison, Dani, Jessa, Kristin, Shayla, Kally, my brother Stan, Hannah and Uriah, and the countless others who cheered and shouted words of encouragement. 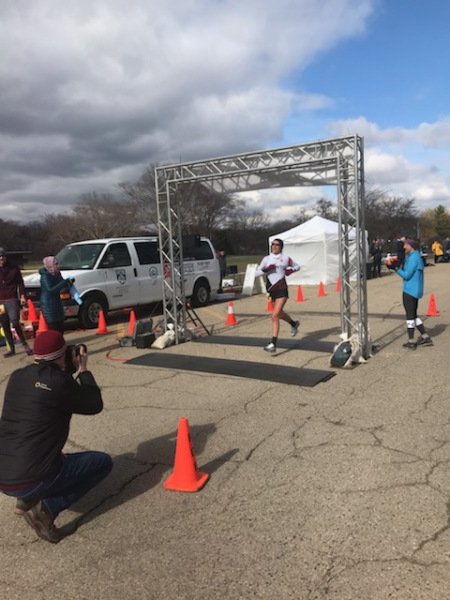 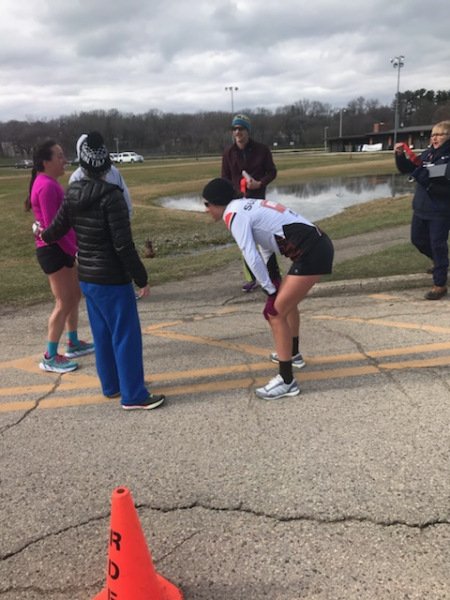 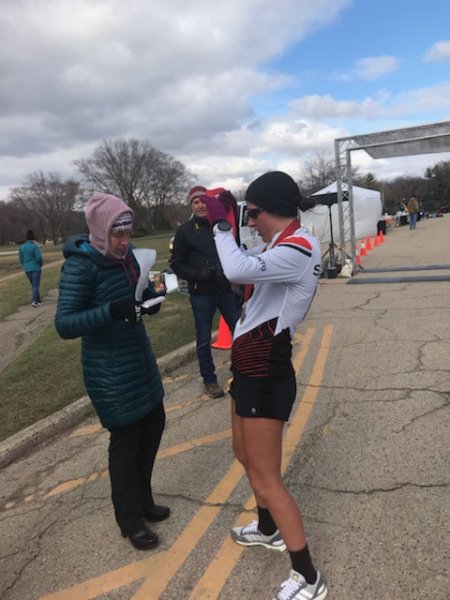 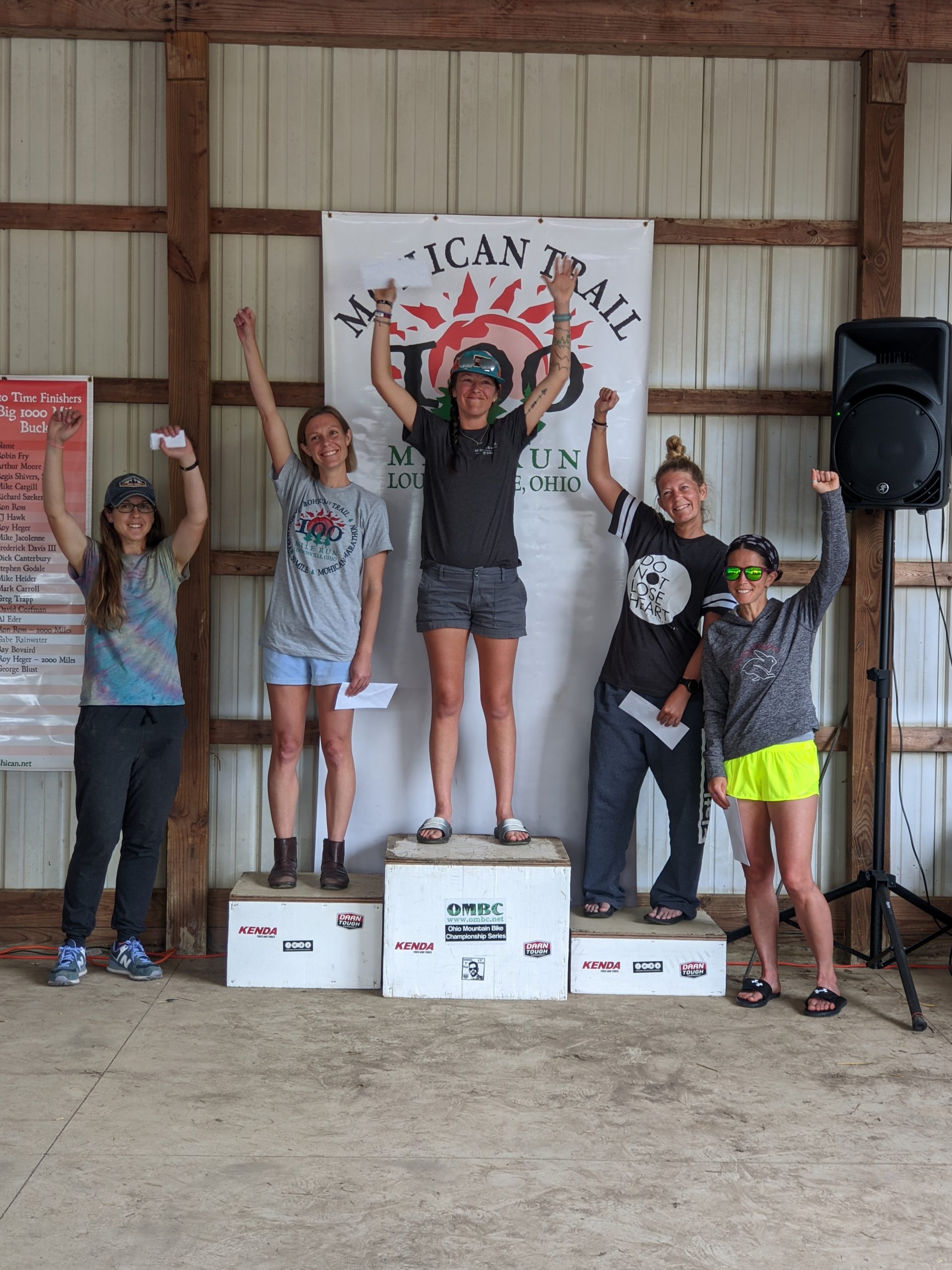 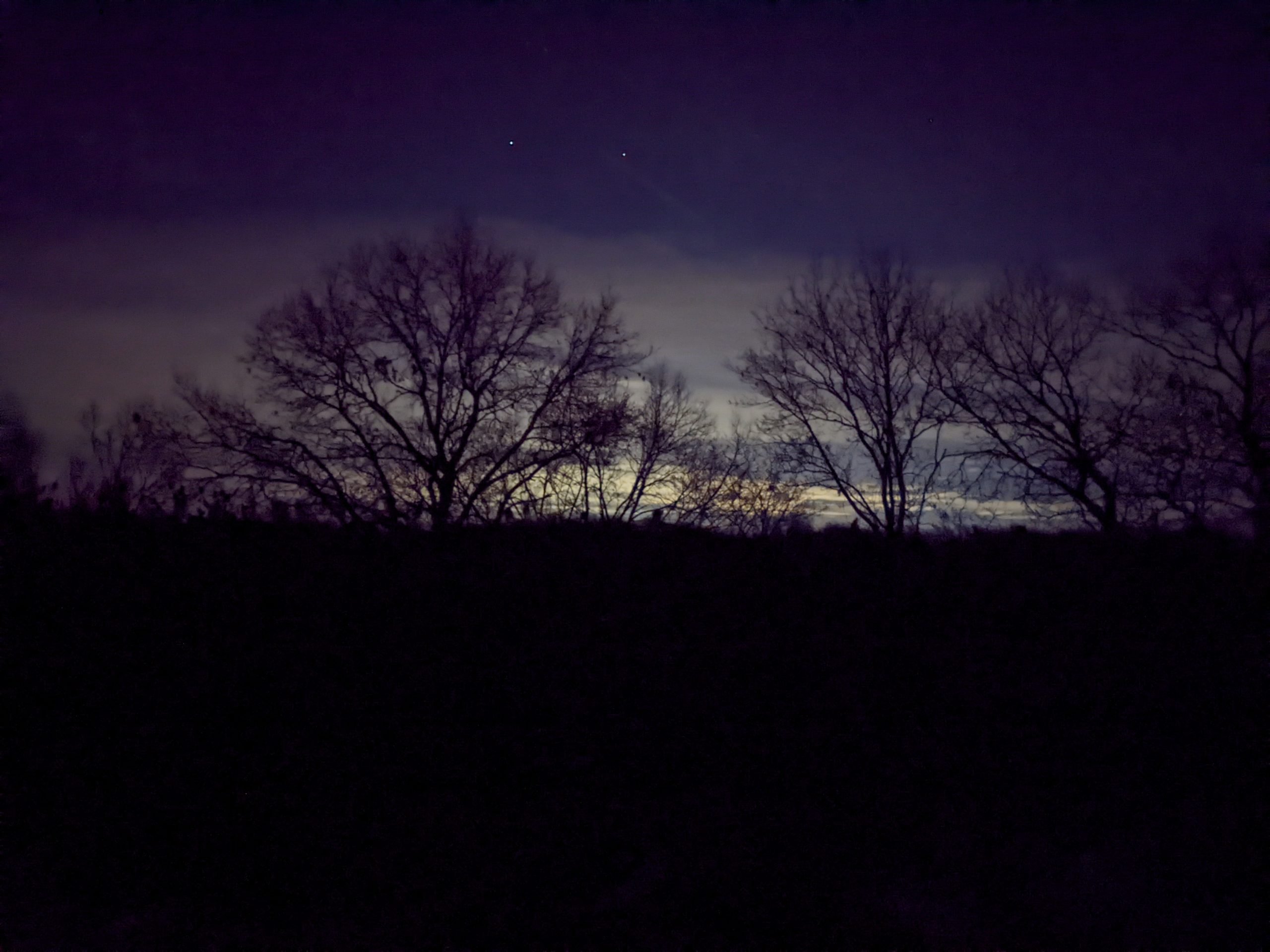 From late night concerts to early morning runs. I

Even at 5:30am before my coffee, the bike still ma

Continuing with the farewell tour of friends!!! Su

Dog walks to our neighborhood ice cream place are 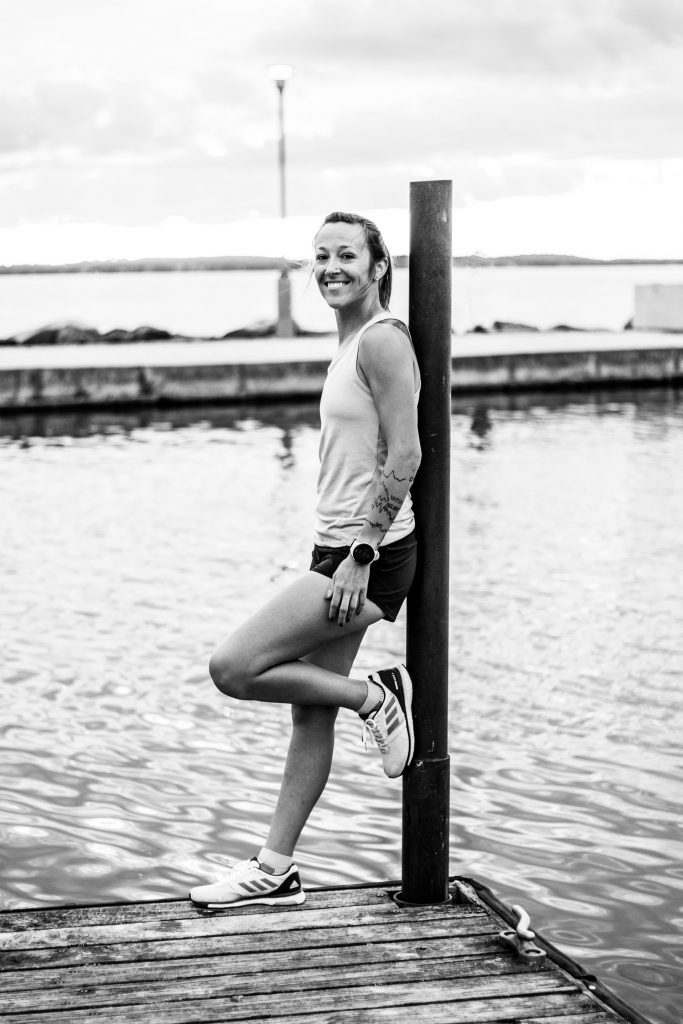