The sun is shining on a dark time

A year ago this day started like every other, it was Monday so it was an off day from running. I am sure I slept in and drank a few cups of coffee before heading into the bakery for my shift.

I am on my way to lead the beginning running group for the Dreambank here in town when I got a phone call. My godfather is calling me, that’s weird. I should probably answer because he doesn’t call me, Ever.

This is the call I knew would come. I didn’t know when, but I knew it would. I knew it would end like this. Of course I can’t remember the exact words he said to me, but I am pretty sure they were “she’s gone.” There needed to be no pre-text, I knew who and I knew how.        My mom was dead.

Addiction is real kids. She struggled her entire life. We had a brief few years when I was young where life was good, she wasn’t using (or least not much), we went on vacations, she held a great job, we ate healthy, we actually weren’t dirt poor, I remember being happy.

Like the cycle of addiction is, that didn’t last. See my Dad is an alcoholic and drug addict as well, he however has about 27 years clean and works every day to stay sober. You can imagine how hard it was for him too. Being a mother of a teenager myself, it’s rough. I know I wasn’t the most pleasant daughter back then, but then having to become the parent puts a great deal of stress on a young person. I grew up real fast and have mastered the art of compartmentalization.

No one will understand what that time in my life was like, and the one person who came close other than my siblings also passed away last year 5 months later.  I made a promise to myself that I would never make my children feel the way I felt during that time.

After I became a mother, yes I was young. 19 years old is too young in my opinion to have a baby, but I did it. You see, I have no choice. I take what life throws at me and clean it up. Sometimes I seem to make no progress, but in the end it stays clean at least for a little bit. My mom seemed to be stuck in a roundabout. She was able to be clean for a few years, then relapse, get clean, then use. When my daughter was about 3 I told my mom at her graduation out of another half way house program that this was the last time. If she relapsed again, we were done. I had to protect my daughter.

So for the next 8+ years we had an almost non-existent relationship. It did get to the point where I could be in the same room with her at holidays, but there wasn’t much more than that. My sister tried really hard to keep contact but got fucked over too many times. My brother, the baby, always tried. They talked on the phone, he tried.

So you can see when I got this call a year ago today pulling into the parking lot to teach a bunch of runners, the surprise I had. Not at the call, but at my reaction to the call. I lost it. Shock that it finally happened, shock that I was having such a visceral reaction. But hey, you know what? That skill I have to tuck things away came in real handy that day. A smile was plastered and we went on like nothing happened.

Come to find out when I got that call, I was the third person to know. My aunt was literally in my moms apartment with her, she called my godfather and he called me. So now as the oldest I had to call my siblings. You can guess how that went.

By Friday we were having a service in Illinois. My siblings and I blared Carole King and everyone wore purple. I met so many people who knew me. Even though my mom wasn’t 19 when she had me she was still a single mom. You rely on your friends and family to help out, so I spent my early years with essentially strangers to me. 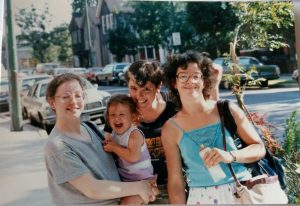 Grief is a serious B. My reaction to her death has been very foreign to me. I am the strong one. I hold everyone else together. I am not the one who needs hand holding. I have been angry and relieved at the same time. It has followed me. My running suffered initially, every run was accompanied by overwhelming anxiety that seemed to come from nowhere. Lately its been more and more pronounced. Maybe because I knew the anniversary was coming, or because lilacs are in bloom and they were her favorite. Maybe with the death of my friend, maybe with the loss of my marriage.

My mom loved pictures, she took them all the time. So one of the things I now have are bins and bins of them. Not until about 2 weeks ago could I go through them. Let me tell you the 90’s were not as cool as all the kids these days think they were!
But she was cool, my sister and I both said we probably would have been friends with her. My dad has a saying “I was cool before you were born.”
Also being the first born there are about a gazillion pictures of me. The ones here I had never seen until the day of the service.

Her ashes sit on my bathroom floor waiting to be let free in the Wisconsin River per her request. Even though I was possibly cruel to her when I cut her off, I was doing what was right for me at the time. But I respect her enough to not put them in a storage unit to be forgotten.

My neighbors at the time gifted me a magnolia tree to be planted in her honor. Of course the flowers are purple.