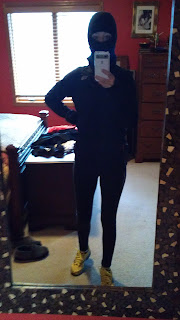 Today I ran 8 wind filled miles! The temp was about 35, but felt like 20 due to the 15mph winds. So I geared up ready to brace it. This is what makes me a runner, sore and not motivated to run this morning, sluggish at getting my feet out the door but I still made it. i still faced the wind even though it would have been easier to crawl back into bed and go back to bed. i would never let myself live it down though, i have a promise to myself to do this.  The first 3 miles were alright pulled the balaclava down so i could freely breathe the air. The next mile was down hill but also straight into the wind. Up hill was next and i had a tailwind. The plan was to do 4 at MP, don’t think I managed that but with the wind I think the same amount of effort was achieved. The last 3 miles were less than optimal. I encountered a cross wind and really hard to run. i made it back in one piece….whew! Also sported the new shoes today and they felt good. my left knee was a bit tender at first, but got better. The shoes I could tell had not been worn in yet and just needed my finesse added.
For attire today I donned sporthill 3sp tights, REI socks, nf sports bra tank, ice breaker long sleeve base, and nf black long sleeve outer layer. Craft balaclava, smartwool hat, bula gator, and both pairs of gloves.
8:02 miles in 1:11:43. bring on tomorrows 10!