Wind is not so friendly 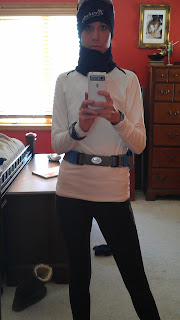 Just got back from up north and had to rush out the door to get the run in before I had to get mimi. The wind was very strong today 23 mph! But the temp was 42 degrees, surprisingly the wind wasn’t that cold just a pain to run against. I was feeling good, anxious to get out of the car and run. Yesterday was a rest day due to Rogers race so I was well rested. I ran almost the same route as the 15 I did last week, but just lengthened it by 2 miles. i ate both gels one at 1:09 the same spot as last week and at about the 2 hour mark.
Wearing the Sporthill tights i was a bit warm, I had the nf sports bra tank on and the nf white long sleeve base. I am wearing a new color for the outer(shocking I know). The bula was a bit overkill as well, but with the wind you never know and I hate my neck cold. I also wore the smartwool hat with the castelli headband on top. I changed that at the last minute before I left. Fuel belt with both bottles filled with water, I only drank one though.